The beginning with Life Drawing... 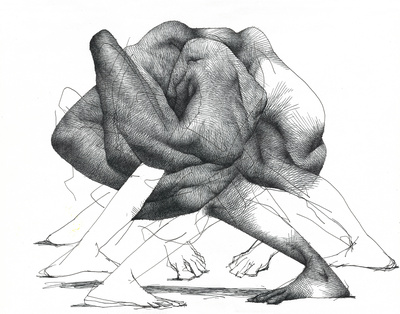 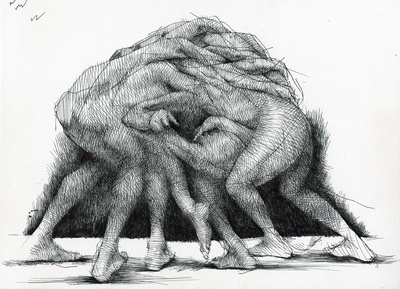 (on the right:first piece in the Life Drawing series. On left: most current piece 2 years after)

My friend had just come back from his therapist. He had taken a portfolio of his recent works to show her, including a few pieces of mine such as the one pictured above. She (the therapist) noticed how you drew a brain he told me. 'Did I?', I thought. Looking at it again I could see what she meant, though subtle and unintentional. The response intrigued me, enough to where it would transform the drawing from a doodle into developing a large body of work from it. It happened as a doodle where I had been working on a series of collaborative projects one after the other for the past weeks while sleeping on a couch in a large artist's studio in Greenpoint Brooklyn, NY. I had never made art outside my own familiar process, and so from this situation I found myself in I woke up one day almost as an instinctual desperation to cure a feeling of homesickness, I drew on paper to experience my old self again. The drawing became a cluster of figures and I thought nothing of it until a week later when hearing the therapist's comment.

I've had a longtime interest in psychology and I was anticipating the possibility with finally arriving at a way to incorporate it into my creative process. It would be a few months before I would find the space to continue, and this happened after leaving NY sporadically and ending up at a friend's home in Grand Rapid's, Michigan for a month where I could decompress from the overwhelming energy/experience during the previous 4 months.

When not enjoying long walks into the small, quiet city of downtown Grand Rapids during beautiful summer days, I would read books on psychology in my friend's basement converted into her art studio. One of the books was 'Freedom and Destiny', by Rollo May. The book became a favorite of mine, reading it over and over. It's too difficult with beginning to explain any of it's ideas here in a short format, but my hope was to again begin bringing such influences into my art. The next drawings I made I consider failures. I found some images online and made drawings from them. They were accomplished pieces in themselves, but they failed in purpose with the direction I wanted to go with art and psychology. This was obvious to me alone i'm sure, felt in the process with making them. I dropped working from references and started again with drawing mindlessly like I had done with the initial drawing months back. 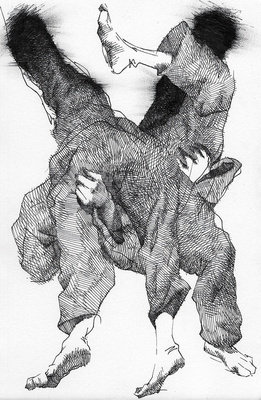 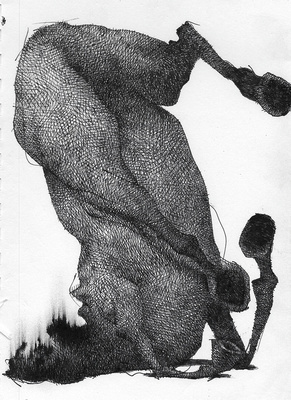 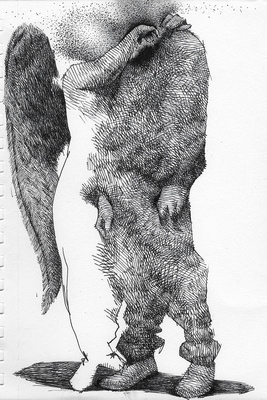 Immediately the drawings shifted. Anyone who draws knows the difference between working from photo references and imagination. Returning to the latter, it felt as if stumbling across a forgotten well. Excited, I would drop my bucket deeper and deeper into it. I never had much interest in the Surrealist artists, but now I had. I began researching and learning all sorts of techniques with working from the subconscious mind. I discovered this was the fundamental key, that source of the well which I drew deeper and deeper from. The subconscious mind. Reading about methods such as automatism, spontaneity with creativity, dream imagery, symbol and meaning, abstract expressionism, and more became the tools for this exploration. 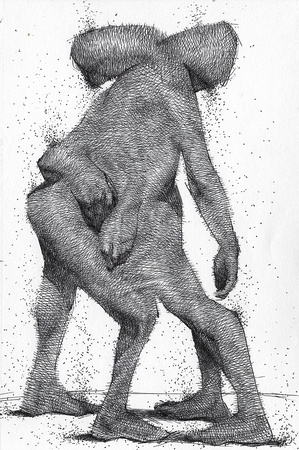 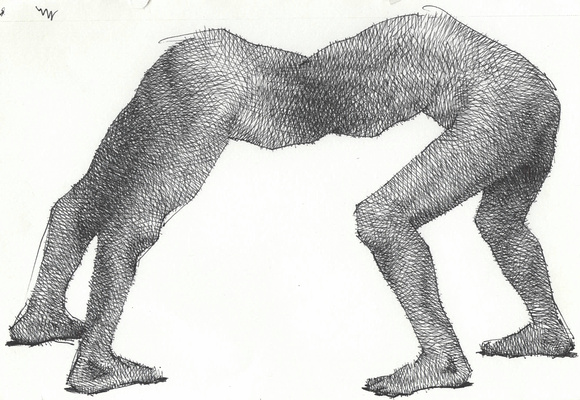 (the next pieces made after not using photo references)