The opening this past Friday at 1810 Gallery in Sacramento, California for my show ‘Art is…’, was a memorable one. It felt a continuation with the idea I aimed to express with the installation of the the show itself. That is, the potentials with art can go far beyond limitations of medium, aesthetic value, even the artist themselves. Hence the show’s title, ‘Art is…’,  left open intentionally because art’s definition is too broad to be contained. The night’s spontaneous interactions with the audience was an example of this, feeling no different than painting collaborations among artists. There was a mutual exchanging of personal ideas and life stories, triggered by the contents of the surrounding artworks. From these one on one connections, mostly strangers amongst myself, I felt a sense of community in people opening themselves up effortlessly. One of my first encounters was with a middle aged woman sharing how she had began drawing early on as a child, but abandoned it somewhere later as an adult for a practical way of living, never considering the possibility where she might make a living thru art. She enjoyed attending art shows partly for the reason with witnessing a younger generation living out the passion she almost but forgotten. I responded similarly growing up in Sacramento how there was no supportive art community as there now obviously is, and how I too nearly gave up my love for creativity because of it.The conversations were vulnerable in these ways consistently throughout the evening. Another woman who always wanted to paint but felt inferior as an artist. I shared how I once worked in hospitals as an art instructor, where the patients’ ambitions were solely those of joy, with no concern for results. And how because of this, tremendous emotional healing sometimes occurred. She liked my abstract works in particular, and I assured her the only trick with those is to allow one’s self to simply move paint around in the fullest abandonment possible. Excited, she was eager to finally pick up a brush. Although thirty years apart, i was able to talk with an eight year old about creativity. His father and I talked about how children are the greatest artists because they are absent of pretense that haunts most adults. 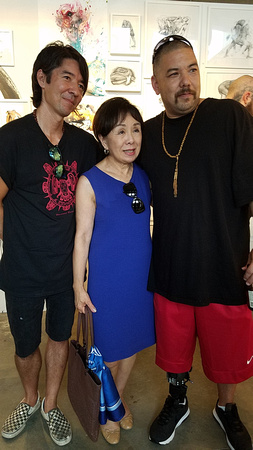 The examples continue, but the last i will mention was the events peak for myself, occurring in the first hour when Congresswoman Doris Matsui dropped by. Introducing myself I found it difficult to connect, mainly from a state of exhaustion. I struggled in conveying the meaningfulness the show had for me where it felt like a personal homecoming after having left 20 years before. Especially arriving under the circumstances from living without a home over the last 4 years, traveling to various destinations where by it’s end I ran out of money, had no identity with an expired passport and driver’s license, lost my cellphone, a victim of bank fraud, and more, throwing me overboard and washing up on shore in my hometown. The majority of the works on display were made in these various places, sometimes in airports, hotel rooms, even other countries, etc. Unable however to explain the show properly, I excused myself exiting to the sidewalk with a beer. A few minutes after, my brother showed up with his family. He noticed Matsui through the window, remarking how she had helped him in a desperate life situation years ago. It was obvious this was to become the moment where he could finally thank her in person. My brother’s story is this- He was involved in an unfortunate car accident where his leg was broken from the hip down. Over the course of the following 7 years he would undergo 13 surgeries, part of which was to keep his foot from being amputated but which he could not save ultimately. Unable to work he qualified for disability. This ran out after a year, and suddenly the challenge went beyond physical reconstruction and recovery. He applied for social security, and by the end of 3 months where the applicant is to be notified wether qualified or not, he didn’t received any response. Contacting the office himself several weeks at a time, he was always told to keep waiting. During this period his wife was released from her job after developing carpal tunnel syndrome on site. The financial struggle intensified with supporting their two children as well as the piling of hospital bills. They would lose their home in the process with going under in debt. And even nine months after first applying, the Social Security office still had no answer. He hired a lawyer, yet things still were not progressing. Our father insisted writing a letter to the local Congresswoman, Doris Matsui. Not expecting a reply, but absolutely desperate he did so. Soon after on a Friday afternoon he received a call from Matsui’s office informing him the social security office would be calling in regards to arranging a court date to settle the matter. Hanging up, the phone rang again seconds after. It was his lawyer. She asked what he had done, and if he knew how a politician suddenly became involved. My brother explained the letter and the previous phone call. The case was expedited, and the lawyer told my brother to be in court the following Monday. Living in Fresno at a close friend’s after the loss of their home, Monday morning came and his wife loaded him from a wheelchair into the passenger’s seat for a 3 hour drive to the courthouse in Sacramento. Before they could leave, the lawyer called again announcing the judge had ruled in his favor. There was no need to appear in court. On top of finally receiving his first check, more than a years worth of compensation was awarded for the SS office’s negligence. And on this night, face to face inside the gallery he thanked Matsui. I believe even the assistant that talked to my brother on the phone was there as well. This event overshadowed my inability earlier to successfully describe the show to Matsui, and yet their interaction was the very expression of the idea with the exhibition where art doesn’t end when a painting is completed, or even after put on a wall for a show, but carries onward into the lives of those who might find themselves in contact with it.

If you missed the opening, there will be a second one this Saturday August 12th at 1810 Gallery in Sacramento, CA. For more info, email at [email protected]