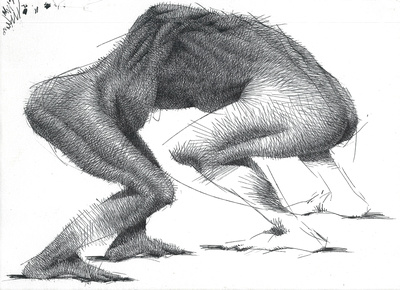 Q: Can you please discuss this current body of work you’ve titled ‘Life Drawings’? Is their a meaning to it’s title? Was it inspired by anything?

A: The title came to me somewhere in the process of making the works. I found myself drawing figure after figure, and I guess Life Drawing came to mind thinking of the tradition where an artist works from a living human model as a subject of reference for their drawing or painting, which is generally know as ‘Life Drawing’. For myself however, the model is not a human subject but is life itself. So its just playing with words and meanings.

Q: How long have you been working on ‘Life Drawings’?

A: Off and on for just over a year.

Q: Can you talk about your process?

A: The process is quite simple. Its really just a matter of drawing. I sit down with paper and a pen, and draw. 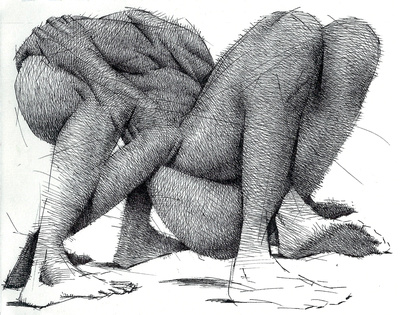 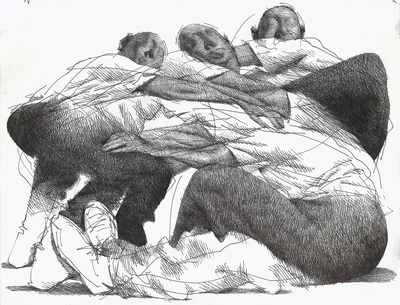 Q: Can you elaborate on that? I notice the drawings are mainly figures intermingling in all sorts of ways with one another. What reference do you use in getting various gestures and correct anatomy for example?

A: Its mainly imagination. This is also backed with learned knowledge of course with drawing, but the latter is just a vehicle serving with riding in the passenger's seat on the paper wherever the hand and head decide to go. With the blank page, I give myself to not knowing what I will draw at all. Acting with spontaneity, reacting after with intuition, then using the conscious mind with bringing more clarity and form to things that begin to appear on the page. I’m finding this approach to be a way which opens a door into the subconscious, revealing hidden aspects within that I wasn’t before aware of. Im finding it extraordinarily fascinating for this reason alone, as if coming to know a most intimate stranger a bit more each day but oddly having spent every second of my life up till then, with them always near. So I guess this stranger really, is the model that I'm calling life.

Q; It looks like your painting the series as well?

A: Yes. Although I mentioned the meaning to the title with Life Drawing earlier, I wouldn’t restrict myself just so it can make sense or whatever. For example, that I should only do drawings because the body of work is ‘Life Drawings’. I like to keep the whole thing open, even if that means it all may go in a direction that is completely somewhere else. Which it sort of is. So naturally, since I paint the exploration has recently found its way there. More exciting is to explore new forms of creativity, new mediums which I've been doing recently with film. Also I've been collaborating with other artists and their preferred mediums such as a writer, a photographer, and more. 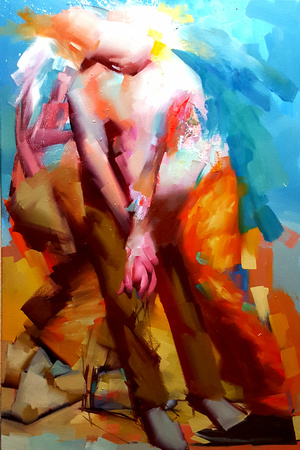 Q: What have you learned from making this series of work so far?

A: Its a little early to tell. I’m too involved in the work and haven’t really stepped back where I can see it in it’s entirity. But I can say i’m inspired to continue going further by whats coming out. I was thinking about all the stuff that we hold inside ourselves. In our heads, in our bodies, in our hearts. You know, the accumulated life experience. The thoughts, emotions, memories that result from it. What do we do with it? I’m inspired by, and this work relates to, not only my own, but the many stories I’ve heard, all the different individuals i’ve known and continue to hear from the lives they’ve lived. Its phenomenal just how much every person will go thru in their lifetime. Such a thought came somewhere along the way with looking at the drawings that were manifesting, in my eyes seeing pieces of us all in them.

Q: Do you have a favorite piece, or a piece that you feel represents what your trying to express?

A: I made a painting just a week ago where in its process and result, reflects what i am going for with Life Drawing. I have no recollection of how I painted it, although it was quite rapid and again only a week ago. What I do remember however, is that I painted the piece horizontally, and settled with it as purely abstract. No representation of anything identifiable, but I must have liked the overall feeling it conveyed or something. A few hours later as it was put aside to dry, I walked by then seeing it with not only fresh eyes, but in a vertical position. It was experienced as a new painting altogether, and I saw the obvious profile of a portrait. So much so as if it were intentional. It was an odd experience, looking at this piece where I knew I had painted it, yet feeling as if I hadn’t. Or even, feeling something else had. Furthermore, I enjoyed sitting with it days later because of the feeling that it conveyed with its colors, marks, and subject. All of this felt sublime, and although I was the creator, I don’t see how I could create such a thing consciously. I think its impossible. I could now copy it, but that wouldn’t be the same. So this process of the mysterious manifested, the invisible made visible, abstraction transformed into a visual representation of symbol is a creative process/result that I'm chasing with the Life Drawing series. I say this in hindsight, thru realization after the fact. Taking the first steps I had no conscious intentions at all with any of this. 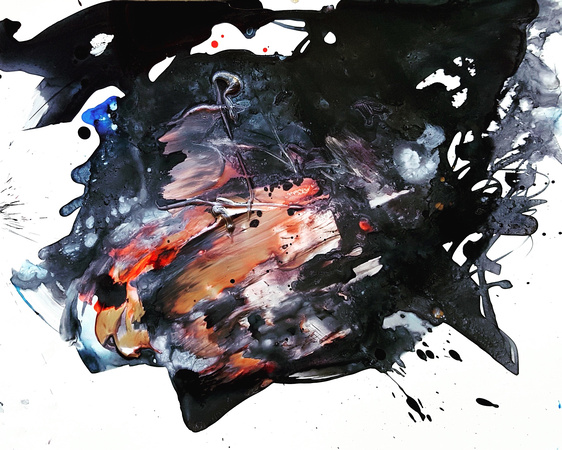 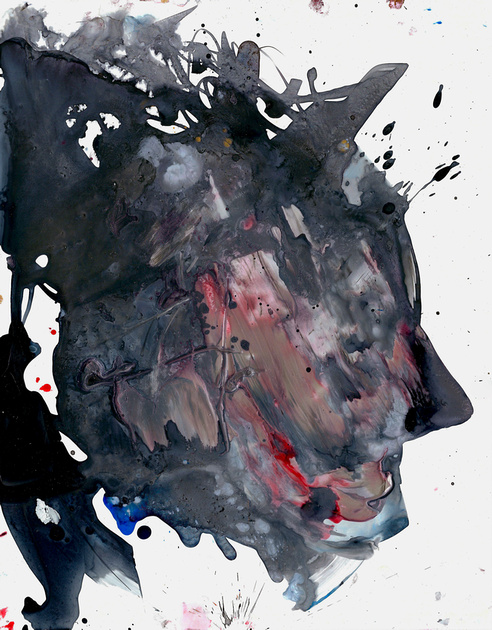 Q: Is there an ultimate aim? Is there something you hope the viewer can take from the Life Drawing Series?

A: I have my own intentions, but I’d rather not elaborate on them. I don’t see the point to. I just hope that for the viewer, the artwork will be of benefit in whatever shape that may take.

Q: So whats next?

A: Well, just continuing the work until its finished. Also, I’m working on making art print,s as well as a book. I have the first prints ready and hoping to release them in the following week. The book although in development, may or may not be finished until the body of work is complete but that hasn’t been decided.

Q: Thank you Akira for taking the time, and I look forward to seeing more Life Drawings.