the struggle and the secret of the world 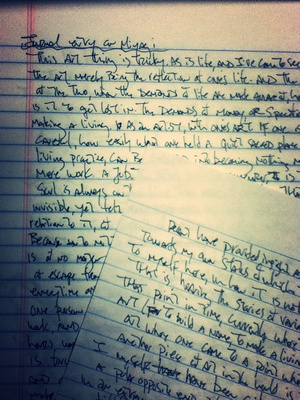 This art thing is tricky. As is life, and i've come to see the art merely being the reflection of one's inner life. And the integration of the two,when the demands of life are made aware of, how easy is it to get lost in The demands of money, or specifically making a living as an artist, with one's art. If one isn't too careful, how easily what once existed as a quiet place of sacred in one's life, can be corrupted into becoming little more than mere work. A job whose nature is no different than the vast number of activities with titles whose only sensibility lay in the purpose of earning a wage. The vital point to remember is that the soul is always on the line. That aspect of our being that is unknowable, invisible to ourselves, yet felt and experiencced always somewhere hidden in the background. And so to place the proper relation to it, of support, of devotion towards, of faith and to guard it. Because in not doing so for the the average person is of no major consequence to the the extent where he/she can hide from themselves, from this soul connection. For the artist however there is the daily confrontation built in the practice of solitude where one takes hold of the medium of their practice. The honesty of one's integrity is contextualized in the activity of their art. Where a person may "check out" on their commute to and from work, and daydream the entire time at the job site, and the sum of hours wasted in a single life time, the artist by default is forced to look into the eye of this existential truth. Into the eye of the mind and heart to see if one is being truthful to themselves. If this isn't apparent in the daily practice, it will be made that more intense at various points over time in nonspecific spaces especially if one has gone astray from the soul source of their creativity.

Always eating from the fruit of the social nature of how I involve myself in the interactions with anyone near that is interested in being my dossier in the sharing of their life, with regards to the artist and the soul such interactions of recent have provided insight as well as motivation to reflect back on my own status of which I will keep others confessions private here, in how obviously the shame to have fallen so far from one's inner nature regardless of how far. That is hearing the stories of various individuals that have reached that point currently, where the external focus of creating art (building a name, making a living solely with it, taking on impossible deadlines, etc) had bottomed out where one came to a point in even the the thought of art has become to paintful and/or confusing. I myself have been influenced in a way of recent, though in a polar oposite way. Placing too much emphasis on the guarding of integrity, and so in an extreme grasping too tightly with the end result being not much different from the artist that makes art from a source of marketing standpoint. Both lose sight of the fundamental nature of the origins that had one creating so early in life before all types of ideas formed with what was enjoyed so naturally, effortlessly. And so in this manner, I find it necessary to put on the brakes, step back, close my eyes and open them with a renewed shift from the detail to the whole and the walking back towards the aim of unification of the two.

And this all leads to this current piece. Mr. Miyagi. I have painted him at times previously, but this is not to to be mistaken as an attempt in moving backwards in repeating a process of past success. Rather it is tapping into a muse, a source that I recognized at some point where to bring forth the energy of which I have deviated from. The archetype of Miyagi as a body of wisdom, comedy, patience, gentleness yet firm.  Stoic yet emotional when its real. A fantasy based in reality, that leaves no trace of damage, but restoration of inner strength and aspiration. Values that I find to be vital, and accessible and in how Miyagi exists as an phantom teacher in the reconnecting of the self to the soul of my experience. I suddenly remember the aim of my life practice, my art practice is inspired and an aspiration in doing the same to others. Guiding anyone that has gone astray, and pointing a finger towards the fundamental light of their own bright inner nature and supporting them in the walking towards it. 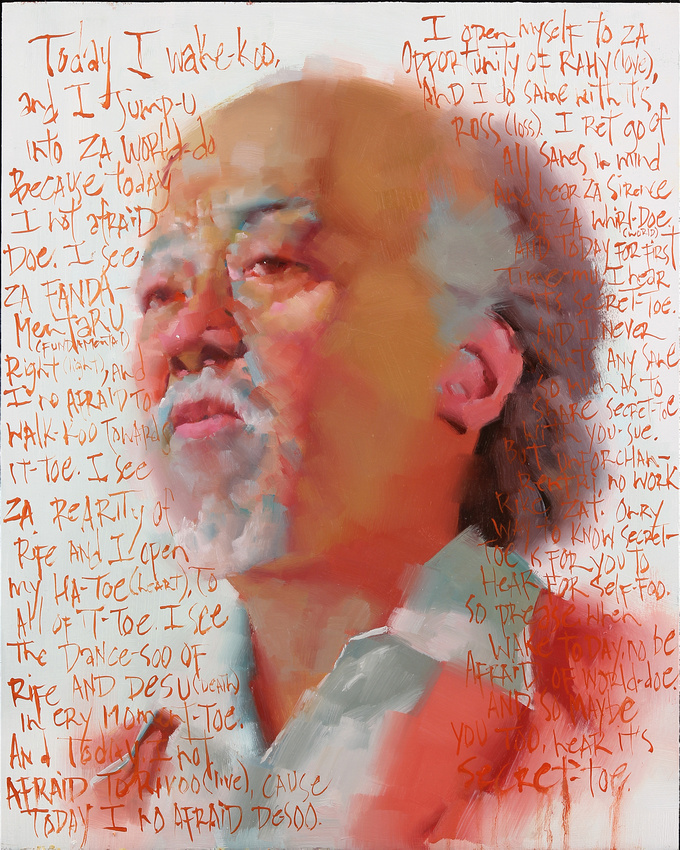