human all too human...

Sometime last year I was thrown into that situation where the entirety of my life had been shaken up. And when it rains, it so often pours. One thing became another and it felt to no end for a point there. One of these matters was finding out about a situation of deception of a lover that I was so intimate with.  A few close friends knew of the matter at the time of its occurrence, but kept it secret for nearly 6 months until I would stumble upon that jar of darkness and open its lid after the lover had just separated.  Feeling betrayed, humiliated, overwhelmed with intense emotions which were so foreign to myself, I knew of not how to work with what was happening to me. Prior to this I had been experiencing tremendous resolve thru exercising the will to face the misfortune that was occuring so recently in my life. This process involved sitting with the pain as openly as possible, reflecting on it afterwards with space and writing, and transforming the results into an art piece. An example is where after having lost my lover, and my apartment, I was apartment sitting my friend Daniel's place for a week. I was in such pain, I lacked any appetite for food, entertainment, socializing... I would sit in the apartment and read spiritual literature such as "The Tibetan Book of Living and Dying" by Sogyal Rinpoche, and relating it to the loss I was at the center of, would go to the kitchen table and write my insights. Upon exercising all that came to me on the subject, I felt so alone. And I sat with that too. Wishing for a way out, I thought of inspiration. Someone that could transmit me the courage, the wisdom, the unwavering devotion, the love. I desired a coach... I always loved the Rocky movie series, and the boxer's coach Mick's face came to mind. He became the symbol of all those qualities that I so desperately was hungry for. I began to paint his portrait and upon completion, integrated the text I had earlier written reflecting on the current loss. The result of all of this was an art piece. 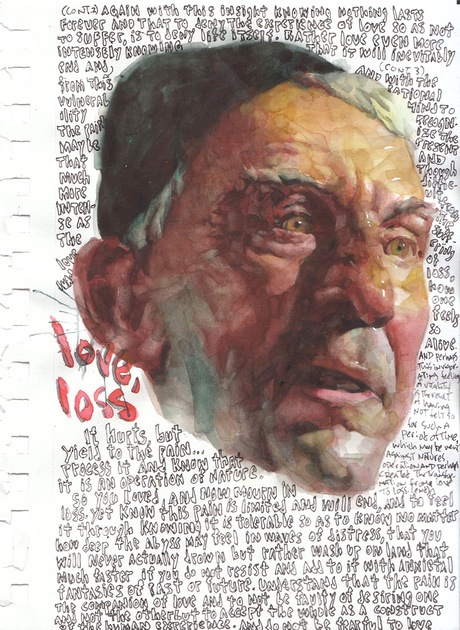 The piece finished, the experience however did not end there. I can't recall how it initially occured, but I would end up developing a connection with an individual across the globe in Australia. Elhi was mourning the sudden loss of her mother, and a connection manifested thru the piece created, as well as online chats we would have. The piece would exchange lives, from mine to hers, and though the communication has milded, the connection remains. This wasn't the first time a situation like this had occured, but the harmony experienced by its entirety has become clearer to myself and has become the ultimate inspiration so as to live fully, and to express from this fullness openly, honestly. The harmony is that of life and art integrated. Only semantics dividing them, the reality not. So this has become the process... living life with awareness, reflecting on the nature of the experience, creating an art piece mirroring this reflection back into the world in hopes of benefiting the life force of another. When I repeatedly express life itself as a miracle, this is the source from where such an attitude comes from.

So much of the artist's path is of continued experimentation and exploration. I recently answered a college student from Georgia's question about my techniques of experimentation with watercolor. Outside of learning the language of painting and drawing during art school myself, I have never and still am not concerned with experimenting with the use of mediums. I do however experiment in other ways. Getting back to the episode that began this blog, with going thru the circumstance of being overpowered by feelings of hurt and betrayal by the ex, an aquaintance of mine confronted me in how I focus on the positive aspect of life so extremely. She suggested I explore the darkness and create from that place since that is the reality of the situation that I was in. So I did. It was a Sunday morning, and I had just left the couch of a friends place and was being picked up by a few friends to go hiking in nature. I had the conversation on the phone with the aforementioned acquaintance and though in a car with 4 friends, I couldn't be there completely with them. I was that much more overwhelmed by the thoughts, the emotions of not only processing the betrayal by the ex, but now by the drive to make art out of it. The car stopped at a light nearing downtown, and apologetically I told my friends that I couldn't do it today. I ran on the streets, perhaps looking a bit deranged, and made my way to the studio. I set up an artist's board with charcoal and drawing paper and walked away and sat under the sun... I sat with the pain but couldn't cry. Though I wanted to, for I felt so heavy inside. I would do a series of drawings without reference other than my own thoughts/feelings. Towards the end, I focused on one drawing and took a break to go outside. Still wanting to cry, I put a the hood of the sweater over my head, and the earplugs of my music in my ears and turned it up all the way. The song playing was John Lennon's "Mother". It wasn't the words of the song that hit me in that moment, it was the intensity of the vulnerable unrehearsed primal screams that were borderline melodic that had me balling in tears. The song is around 3 minutes, I must have lost myself in this manner for at least half of it. 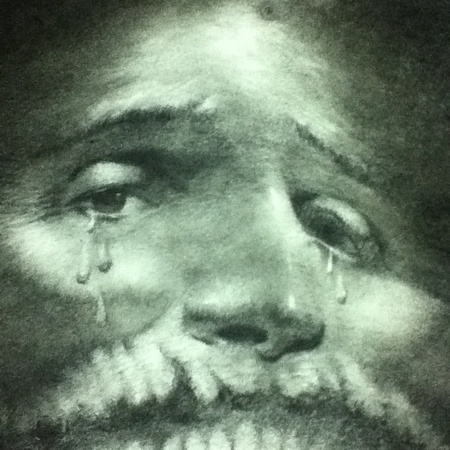 Though I found a quiet space in the dark, when the song finished I plugged my ears back into the real world only to look over my right shoulder and see a young individual remove his eye contact as if he had just been pointed out in a criminal line up. I wasnt embarrased however, I was liberated. I went back to the studio and finished the drawing. And getting back to experimentation, the drawing was a failure but a learned experience in the end. Upon completing the drawing, there was nowhere to take it. Unlike the above "love,loss" piece, this piece invited death not life. The nature of this piece was about a sick feeling I felt in my stomach, and art was a container to bring it out in. I didn't feel the will to invite such expression into anyone else's life. Though I continue to do such pieces, I keep those more to myself. There potential is more cathartic towards my own healing, so that I may cultivate the strength in attempting to make expressions that can perhaps add to the life force of the world, not take away from it. 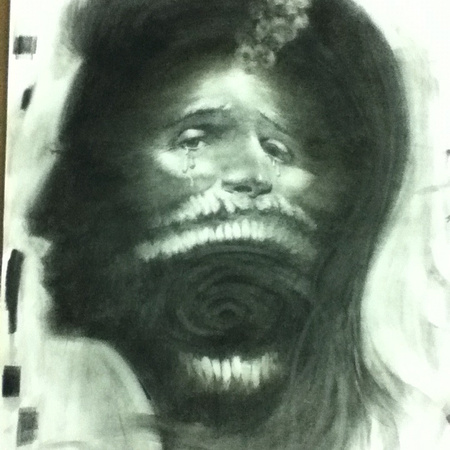 And so with this recent piece, the exploration, the experimentation continues. I've been working with hot pallettes, because orange, yellow, reds best express the nature of that which I have been focusing on. More spiritual oriented expressions. And so for fun, why not take it the other direction. So I began with blue, and allowed the reflection to arise from these colors as well. Learning from the trial and errors of the past, in relation to all that was mentioned in this blog writing of life, art, intention... this was the result. Human, all too Human is the title of a book by philosopher Friedrich Nietzsche. The piece isn't about his ideas however, I've always liked the title, and used it as a reference point in the summation of this piece's spirit. The beauty of the unconditional human experience... enjoy

The words written in "Human, All too Human"... -Human, all too human. To be afraid. To forget. To make mistakes. To struggle. To be confused. To lose soo much, to lose everything perhaps. To take accountability for the consequences of one's actions. To admit guilt. To experience pain. To suffer. To cry. To commit sin. To cope. To experience addiction. To hate. To lie, to cheat, to steal. To fall. Yet, it is in the humility of being open about such things when brought to the light  of awareness, that begins their resolution. . The resolution of so much that we deny in our experience resulting in an incomplete human experience, becomes wholesome . The denial of life becomes a distortion of ideas of what reality is, and the avoidance of experiencing reality directly is replaced with coping. No form of coping holds the power of contentment. Rather than liberation, one is slave to the external attachment of one's choosing. In the desperate search to replace the loss of one's inner half, everything outside one's self is manipulated to try and make it fit. But it never does, and we experience this over and over when we lose that, whatever it maybe time and time again. Yielding to the fear however, taking the leap, even a little one, the hidden nature is revealed as the heaviest release as if shedding the weight of one's entire body and walking forward in great strides effortlessly. Everything falls in its place so easily as if puzzle pieces rained from the sky forming complete images of the world in their consolidation. Dark turns to light in all things. The world has transformed in a complete reversal. Burden becomes purpose. Vulnerability becomes strength. Struggle becomes appreciation. Death becomes life. Life is seen with eyes wide open as if waking up from a coma, almost as if seen for the first time. So clear, so fresh. Life is received as the greatest gift, and the gift is opened by living it unconditionally for it's wholeness. As a complete human, one never feel the need to apologize for how one lives. It is the incomplete human, that finds him/herself apologizing . Apologizing to themselves for missing so much of what was hidden for so long, to themselves. And so when it is revealed, open the entirety of yourself without a single doubt to it. 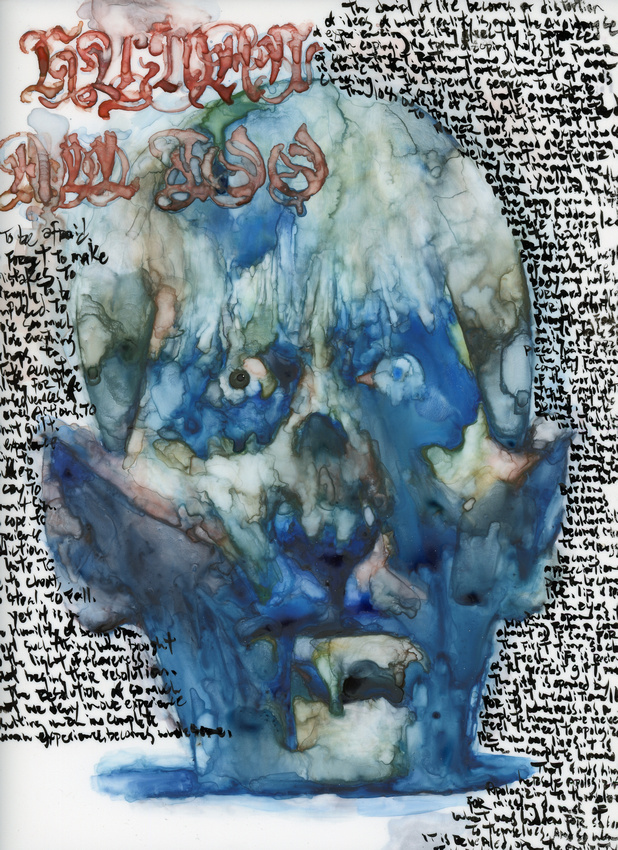