So yesterday, I created a drawing of the character Wormwood, from CS Lewis' book The Screwtape Letters. The main character, the narrator is Screwtape. He is the teacher devil, Wormwood's uncle, who is giving advice to his student on how to manipulate the human mind, heart into joining the side of the devil as opposed to god (material vs spiritual). When reading literature of this nature involving god, the devil, heaven, hell and so on, I do so metaphorically. In this manner, I find the nature of god and the devil, to be relevant to our contemporary lives. As Goethe said, "everyday freedom needs to be re-conquered". Everyday we walk among a world of temptation. A world whose survival is based on a non-stop pulling of the strings from when we wake, to when we sleep. Its experienced from tv (whether shows, movies, advertising), the internet, social networking, walking on the streets, pressure from peers, jobs, school, and on and on. The society I exist in is one where its blood is the economy. To keep its heart going, there is the relationship of manipulation from external forces (politics, corporations, religion, etc)  and the rationalization, coping internally (the individual) of it all. It is easy to find one's self lost, or lose ones self altogether. But there is always that undercurrent that exists, that is a whisper in the background that we often ignore. It is the antithesis to that dark materialism world of worldly individual collective bottomless feeding of the ego. It is inherit in all of us. It is ineffable in nature, but a few words to describe it... it is breathe, it is light, is salvation, it is contentment, liberation, awareness, realization... though without form, without name for sake of expression some call it God, as opposed to what has been described in the preceding words... the Devil.

For the drawing, I based the portrait on one of Rodin's busts. I always love the emotion in his works and aimed to express that moment of disappointment where this devil (Screwtape) realizes that despite all efforts, another human patient has been lost to the world of eternity... to god. 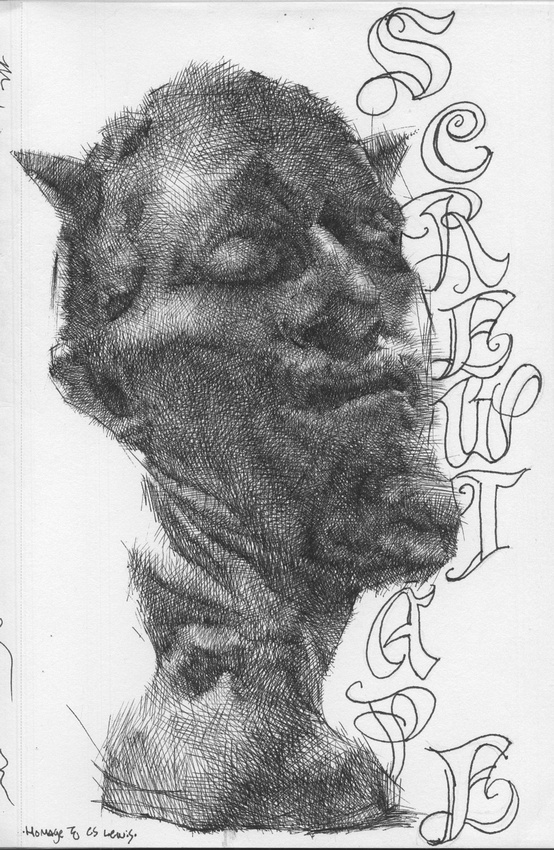 Dwarka escorts(non-registered)
I’m happy to see your article, better than last time, and have made great progress, I am very pleased. I am looking forward to your article becoming better and better.
http://www.aishaescorts.com/dwarka-escorts.html
http://www.jaanuescorts.com/dwarka-escorts.html
Noida Escorts Service(non-registered)
What an overwhelming read, not the humblest piece that one would want to inspect. It is reestablishing to go over these articles.
Hyderabad Escorts(non-registered)
https://www.basheeraraza.com/
https://jeny.co.in/