In creating this show "The Life Show", I wanted to further explore and express the nature of life itself. The show contains pieces from my "Self" and "Culture" series, both of which were explorations/expressions that would lead me to this current discovery of "Nature". 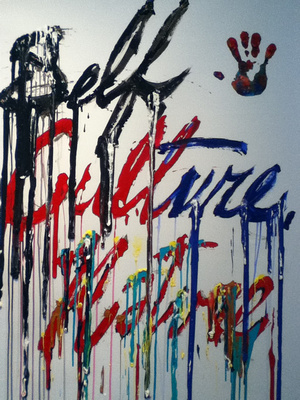 There also being several artworks that are the buildings of the Nature series, I wanted to use the show itself as an organic approach in further discovery as to the nature of life. By this I mean being open to however the show may develop. There is a pre-plan of course, but a point came during the installation where I would let go more and more and the show would begin to take on a life of its own so to speak. One example is the final piece that I am including in the show. So here it is explained....

After the first two days of art installation, we would take a break and not work on Saturday. I was feeling anxious in that I should do something, anything to build to the show. The first thought of course is to create another painting in adding it to the body of work. But this could only be stressful, and having been there, done that it is trying to force life too much. So I went swimming, urban hiking, and at night would attend an art show at Somarts put on by a freshly graduating class of fine artist college students. I subbed for Kevin, the professor, a few weeks before the end of the semester, so I got to meet the students and was informed about the show. I arrived at the last hour of it and at the reception desk had bought a few raffle tickets to support the event. The raffle itself was to give away around 10 paintings to 10 various ticket holders. Being a minimalist, as I entered the gallery space I began to give away my tickets to people I would run into. However, before I could entirely do so the raffle had begun within 5 minutes of having bought the tickets. Immersed in a mass of people, confused, overwhelmed slightly I turn to locate where the announcement of winners is taking place. I turn around to find I am in the center of it and my friend Brett is announced as the special guest in drawing the raffle. Seconds later they announce "Aki!"... I take a picture at that moment still not sure what is going on for I had no intention, desire to win. But from the laughing smile of Brett, its obvious. I'm the first winner. 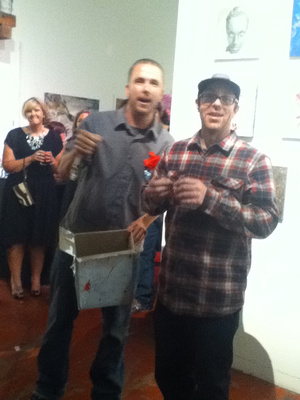 So I take a photo in front of my acclaimed piece and it is a conceptual portrait. My cup of tea for it is an expression that I continually work with. After the raffle, the artist Madeline would introduce herself and give me the painting. She was absent on the day I subbed and we express mutual gratitude over the piece. She tells me that as part of a class project where  they were to choose 3 contemporary artist they are influenced by and to do a presentation there of, she chose me. I was flattered and this painting was making more sense. 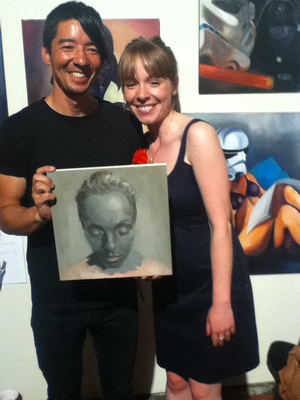 She warned me of her friend Holly who wanted the piece desperately and may even try to purchase it. Sure enough, I would soon after be approached by Holly. Madeline was correct, and Holly and I discuss resolution over ownership of the piece. I don't want to sell it, and though I authentically love the piece I do not collect anything. And this is usually awkward, for I do not know what to do with gifts. But Holly is here, and she shows me all the raffle tickets she purchased with intention to win the painting. I'm touched, and its obvious that the problem of what to do with the beautiful artwork is solved. 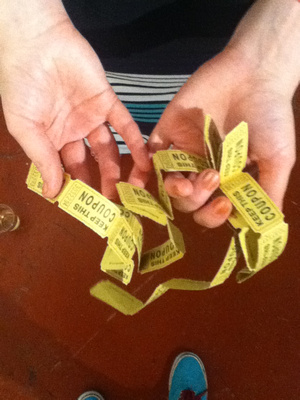 I have incorporated the piece into my show, and at the end of it will pass it on to Holly. And one last note is that I at one time had vision to create a very similar concept, but never did so, and how wonderful that another artist would do so and it would end up in my hands. And not any artist, but an artist that was openly inspired by my own expressions. So in conclusion, this expression of Life is 'harmony'. Its when trust exists. Trust in the basic goodness of life. That life exists naturally, in its constancy. In its truest nature of reality which is simply here and now. And if one can surrender the preconceptions, the opinions, the jugdements, the technicalities, the grasping, manipulation, control and simply experience it for what it is spot by spot, second by second openly, fearlessly how much of a miracle it tends to be. Life opens up in an unimaginable way. One is harmony with all things, living in complete accordance with nature. This isn't about winning a prize, rather the prize is experiencing the uplifting nature of ourselves as if we begin to use wings that we never knew we had. And so this final piece created as the result of this experience is done so in hopes that others will be uplifted, and/or inspired for their own uplifting life pursuit. Let us burn the cocoons we build ourselves into only in feeding the egos of our minds, and spread our wings and live openly in the infinite sky like nature of our hearts, minds living in harmony with all things made available to us.

Though a photograph of the complete piece self is not here, it is a compilation of the original painting with photographs (some of which are here) and words written on rice paper with ink, and a printed out email. It will be on display at the show opening this Saturday. More info on that can be found at the link http://emtab.org/the-life-show-jun-2013/