the process was one of transmuation, just like the concept of the piece itself.... 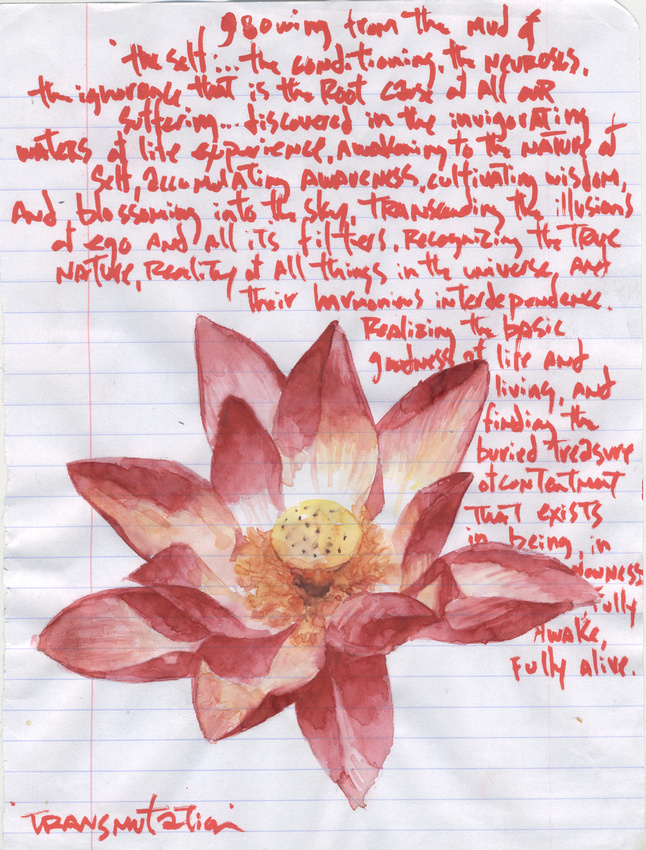 Such a simple piece, but to complete it was such an adventure... For an upcoming themed group show being flowers at ModernEden Gallery in San Francisco, I had a clear idea of what I was going to work with. I wanted to do piece exploring 'presence, nowness, the moment' in the process of executing a painting. Working as a professional artist with deadlines, its easy to fall into a place of result orientation, where the process itself is almost a hinderance so as to get to the next piece to complete it. Art becomes a job in this way. Myself, I am always prioritizing the integrity, the spiritual nature of it. So the process began with this idea, and continued with myself walking to the flower shop, 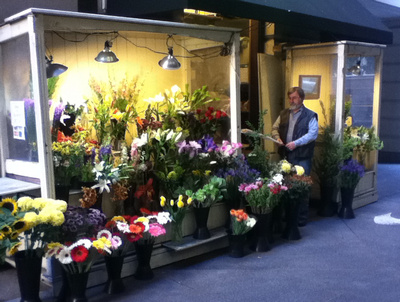 interacting with the florist, taking a flower to the studio and painting it in a luxurious kimono. The point of the kimono was that I would be disciplined to be intensely present while painting or else a distracted mind would lead to the distress of having stains of any sort on my kimono. I began the painting and took a short break, falling asleep for an hour on the side. I would awake to the flower (a rose), losing its shape completely being hung on the wall horizontally. The deadline was only in a few days, and painting in oil I began to feel the distress arise where it would be difficult to paint a flower from life in this manner. I could of course roll with the punches, painting the de-evolution of the flowers shape, but that is not the concept I intended. So I would sleep on it, and put the project in the bag and approach it the way I had not wanted to. It seemed the only practical solution. To paint in a quick drying medium from a photo printed from the internet. I had wanted to explore the lotus flower and its symbolism, so that became the subject. Keep it simple. Or so I thought. Being more of recent practice in the development, creation, execution of my art, though time is declining quickly towards the deadline I didn't want to compromise to the extent of just sitting in the studio as the world goes by, muscling a painting of a lotus. I wanted to integrate life into the process itself. So before going further, the symbolism of the flower itself in Eastern Culture is one of transcendence, or transmutation. The lotus grows from the mud, thru the water, and eventually rises above both to grow into the sky. It is symbolic of ones spiritual inclination from a grounded ego self. That being said, I would start the day by going to Yoga class. After class, as has been common recently, the instructor though I do not know her at all other than by name, would open up to the nature of her recent situation of suffering and her practice of finding resolution/awakening thru it. Right after class, I would go across the street to the civic center and approach a group of meditators in session. I noticed from recent research that their hands were in the lotus mudra, 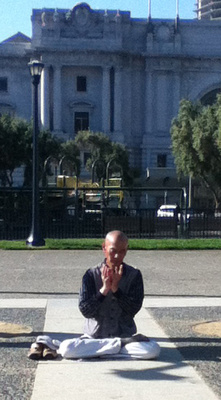 and they were seated in the full lotus posture. Any doubts to paint something else today had left my mind. The universe was signaling. I wanted pointers on guided mediation, and they pointed me to Jason, the teacher. 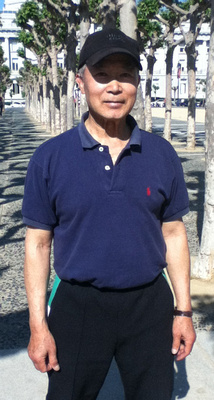 He didn't answer my questions, and told me to follow his movements. In my mind I was thinking why is this guy teaching me Tai Chi as I copied his movements. The next thing I know as I look over my shoulder the rest of the students are doing it as well. I am suddenly in a Tai Chi class. An hour later I would find out the practice is Fulan Gong. From there I would go to the ocean for a swim, all of this before noon. Lol. I would meet a fellow guest swimmer from Portland. He was training for a twenty mile swim at Catalina, and wanted to confront his physical, mental abilities. After I would come across fellow navigator Christopher Jernberg who had experienced enlightenment for the second time in his life. We had a session sitting on swings at Make Hang Gallery where I listened keenly as he described his realization of attachment as the cause of all suffering, and the nature of true reality and contentment. I had absorbed his glow and left north beach to go to school. I came across a student Gabriella who I had only met a week earlier, and as I described the failure of my initial project she noted with laughter that that had the art itself. The discovery, experience of impermanence in the creation of a piece of art where there was nothing captured (the flower dying) for the nature of it perhaps can not be truly captured. Only an echo of it. As i'm writing this Beethoven's moonlight sonata happens to be on. She was right, but that wont sound acceptable to Kim and Brad at the gallery when I walk in today and have no physical piece to show, only a description of it. I go downstairs and come across Victor who is a former student, now friend/artist comrade and he is educating me on Astral Projection. My take on it is that it is an experience of transcendence. A mental/physical one. I finally begin the painting, and it fails. Perhaps exhaustion from all I have described in participating in in one day, but I think it is deeper as will be described. Suddenly frustrated, and now feeling stressed again, I catch the bus to another district to meet with friend Chris Conroy and new friend Choishin to have a drink at the cafe. 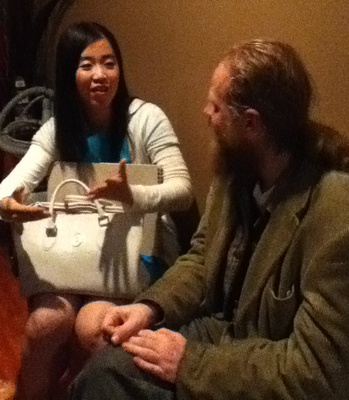 I take art supplies and head for the destination. Only a few blocks away, I go into the FoodCo. grocery store to use the restroom. I see a tall buddha like man dressed in the purple robe. I look at the clock, I have 45 minutes till I am to meet my friends a few minutes away so I approach him.. "What is the nature of mind?", I ask him. He bows, to me hands clasped in prayer and begins. We talk for an hour in the center of the store! I end up leaving with a dharma talk on affinity. Wow. Lol. I get to the cafe, apologize for being late and re-begin the painting. Abbot Alfred, the monk, helped empty my mind of distraction. Not feeling the need to get a beer to put me into that space to do what needs to be done (complete the painting!), I order the hulk smoothie. It has spinach, banana, protein and other stuff. Apologetically not being the best company, I paint while my friends talk about the cosmos, existentialism and other inspiring meaningful things. It was like live radio. The best background noise that could exist for me to paint in the situation. We go to the Thai Restaurant and I continue to paint, but the harmony is broken for I become self conscious of painting a Lotus flower in a thai restaurant. I don't know if the association is a logical one, but I put the piece away and would go home, sleep, and continue the next day (today). I take the piece to my art with elders class early morning, but I become involved in the priority of working with the elders so I have little time to paint the lotus. 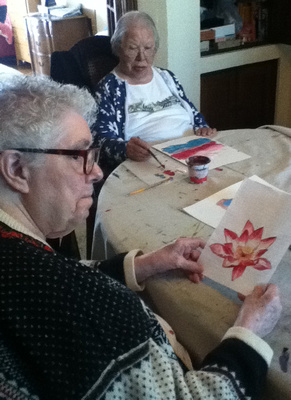 After class, I call up friend Audi who lives literally across the street if I can use his apartment to finish the piece. 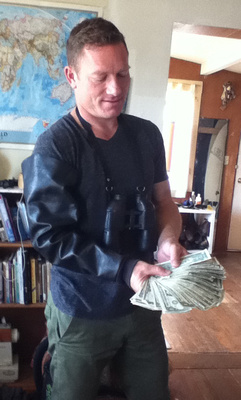 He says yes, and as I leave one residence to the next I call up friend, spiritual guru Laurence to get the correct traditional symbolic understanding of the lotus before I misinterpret using my own poetry. He lays it down, and I make it to Audis where before I have a chance to write, we find ourselves in a conversation about the worlds suffering and our relation with it. I immediately empty from all of this, and write the poem. It writes itself and I incorporate it into the piece with red marker. I get lost in the painting itself till it is completed and make my way to the frame shop, and now the gallery. What is the point of all of this? haha. Richness. Living. Love. The process for this piece is all of these deeply. The result may not necessarily encompass this in its simplicity, but this integrity. Having devotion to what is important, even if know one else will see it. A deeper, detailed reflection on the process...