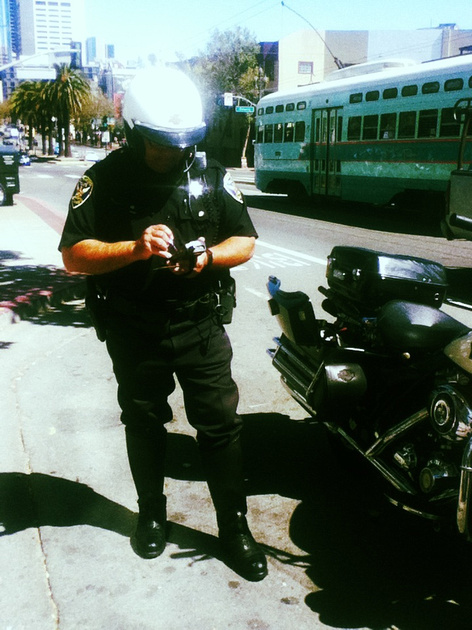 Every now and then, I take a moment to stop and reflect... on life on living. In buddhism, one defintion of karma explains that if you want to know your past life, simply look at your present situation. And if you want to know your future, look at your present actions. One way that I personally do this, is thru looking at artwork that I have participated in creating from the past. This piece of 'homage to the thinker' is such. This was created around 2 years ago. During that time, I was much more analytical. I would experience a situation thru thinking during it. And its interesting in how now, I have removed the thinking aspect of which. So as to simply experience the moment, without analysis. And I feel its important to take this time out, and look within. And how we may surprise ourselves. With the speed of life, especially in bigger cities, how easy is it to find ones self lost in the energy. One minute your on a centered path, and the next you're in the  thick of a stressful relationship, trapped in a job, oblivious to habitual heavy drinking or drug use, floating in banality, etc. This reflection was inspired by my own detour, which was brought back center by an incident with a CHP officer. I was over working to complete more deadlines than I should have taken, drinking more than I should nightly to remove the edge, navigating social antiquities, and so on. I was a fireball of energy intensity, and the art process proved unproductive. Building paintings, only to destroy them as deadlines approached seconds closer. And then it happened, I was on my way to art with elders, flying thru downtown SF on a Monday afternoon, when I heard the siren after blowing a redlight intensely. The short version was a situation developed where a police officer and I had an inspiring talk of karma. He initially approached me with textbook authoritive psychology. I was present, and responded by taking full responsibility and expressing openness. He would go on to tell me how he was a religious man, and at one point says to me... "son, we live in a world governed by laws of nature beyond our comprehension... you may be upset that i'm giving you this ticket, but maybe it happened for a reason." I told him I was bummed about the ticket, but that I am in the process of understanding these laws. I described my current situation, and that I saw this situation as a lesson to slow down. Not necessarily on bike, but in life overall. He asked if he should smile for the picture. Hehe. Upon leaving the scene, I was confused. Shouldn't my day be ruined? But it was the opposite. And the it hit me, all the knowledge I had been cultivating was breathing in the situation effortlessly. To experience life for example as a constant opportunity to awaken to one's self. Even in circumstance such as this. With awareness to guide one thru. And though when I read the art expression of "homage to the thinker" from 2 years ago, and feel a little embarrassed by its content. This ultimately is inspiring in how I have evolved. 2 years ago, I would have analyzed, over analyzed the situation and would not have experienced it as uplifting. My point in all of this is that we have the potential to create the reality we wish to live in, to a certain extent. We of course are vulnerable to the external phenomenal world of people, places, and things, but we can cultivate our relationship with them. One experiencing the glass as half empty, the other as half full. And what better way than to look into the mirror of ourselves. For myself, that mirror is the artworks of the past. What is yours? Enjoy... The text below is the text transcribed in the painting. The opening paragraph is the red text, and the following text is that of the gold halo behind the thinkers portrait. 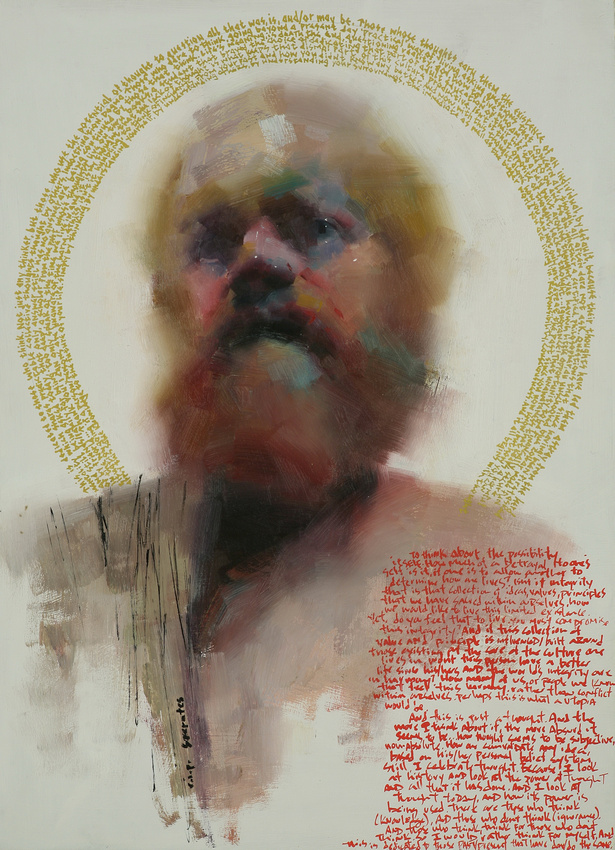 to think about the possibility itself. How much of a betrayal to one's self is it, if one is to allow another to determine how one lives? Isn't it integrity that is that collection of ideas, values, principles that we have sacred within ourselves, how we would like to live this limited existence. Yet, do you feel that to live, you must compromise this integrity? And if this collection of and value and principle is influenced/built around those existing out the core of the culture one lives in, won't this person have a better life since his/her's and the worlds' integrity are in harmony? How many of us, or people we know that feel this harmony, rather than conflict within ourselves. Perhaps this is what a utopia would be. And this is just a thought. And the the more I think about it, the more absurd it seems to be… how thought seems to be subjective, non-absolute. How one can validate any idea based on his/her personal belief system. Still, I celebrate thought. Because I look at history and look at the power of thought and all that it has done. And I look at thought today, and how it's power is being used, There are those who think (knowledge) and those who don't think (ignorance) and those who think, think for those who don't think. So I would rather think for myself and this is dedicated to those past, present that have done/do the same.
This is dedicated to those who think. Not just any thinker. But those who use the potential of thought to question all that was, is and/or may be. Those whose thoughts earn them the existence of an individual, by default, because their thoughts have led them astray from the herd mentality which shares predictable collective thoughts, thought by others. Indoctrination, dogma. Those who dare to think , going beyond a present day 'practical' way of living. Asking questions that concern all though, all often dare not to ask. Questions that since having been first asked and still being asked today, that only answer still has no answer are being continued by those that think. Life's meaning, is death the end, questioning reality, 'god', how to live, who am i? and so on and so on. Whether a certified philosopher, an unschooled blue collar made fun of by friends/family for being too deep, a scholar from the past, whose thoughts live on thru books, a student that braved the choice of dedicating that part of adult education of their life to a field built around thought, yet having little opportunity to be financially secure in the world… Thank you. I can only speak of the time we live in and it is my thought that the lack of thought is what keeps that dismal part of this culture productive. Isn't it that opposite of thought, lack of thought..ignorance! that unawareness that keeps a harmful situation going if a person/persons are unaware of the harm. Ethics. Isn't it humbling to think of incidents from your past and how you didn't know any better. And now, with this thought alone how you can not only not repeat the past since you now know, but now you can apply this same knowledge to the future of your life. Simply by thinking. By understanding yourself, by understanding others, by understanding your surroundings, the immediate as well as the bigger world you are living in. Responsibility, consciousness. And it all begins with thought.