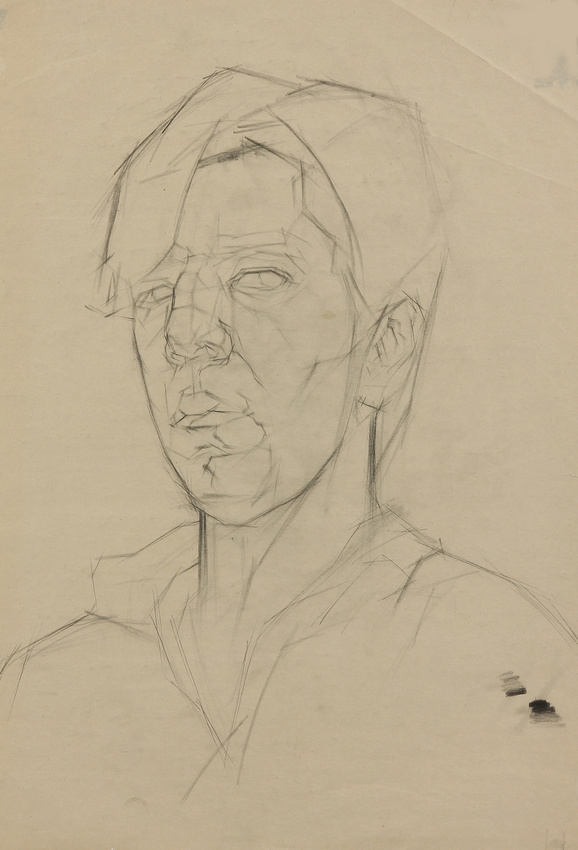 I have always been a sensitive person that internalizes constant experience as far as I can remember developing first signs of consciousness. Like Carl Jung's idea that we are born as blank slates and thru development accumulate writing on that slate over the years, I was very aware of these writings, and in my late teens I would begin to naturally express these experiences thru drawing. Drawing came so natural to me like breathing. I have been doing it before learning to write the alphabet. I would find myself in art school in my early twenties, and here I would become aware of the world of the technical side of drawing and painting. Prior to, I had always learned on my own. Like many other american males, I first learned from copying comic books. In school, being introduced to great masters such as Michelangelo, Rembrandt, etc. as well as seeing student/classmate work that was very well developed technically, I would begin to see the limitations of my technical abilities. This limitation was seen to me, as a limitation in expressing that which I truly want to express within. My insight, thoughts, feelings, and so on. So I put all that aside, abandoning expression and focusing purely on technique. Here again, I was fortunate to come across another Mentor, Henry Yan. He took me under his wing. I would take a figure drawing class with him, and he dismissed myself from doing the homework that the rest of the class was doing. My assignment was simply to draw from life, 24-7. And I did. I am so fortunate to have someone so knowledgeable and experienced open their heart to me. Thank you Henry. He put me on a path to really focus on basics of seeing, analyzing, understanding, and translating, not worrying about anything else. I would dedicate around 3 years to this, and it was hard. But it payed off. Getting closer to graduation, classmates were working on portfolios, going to workshops making finished paintings. I would still bring newsprint and charcoal, spending 3 hours on measuring, blocking in proportion not concerned with finishing anything. And in my senior year, I would go back to applying the technical discipline I had learned, with the concepts I wanted to express. My ability to say what I wanted to say it, had tremendously developed. It was a liberation feeling of autonomy as the result of delaying gratification. I set a goal to be an executioner of form follows function, and I achieved it. This isn't to say that it was all solved in that time of schooling period. Even post graduate, and even now I go back to basics working on there development. But I feel confident to say I can say what I want to say, visually, free from the dependence of style.

The posted examples are (1) a self portrait that I did in the stages of this foundation development. It was done from a mirror in the apartment where I was living at the time, really trying to develop my hand, eye, mind. This is a 'structure drawing', where I was spending hours trying to buid a 3-d translation only using line. I am not concerned with the politics of working from life/photographs, but I feel working from life (in drawing) is a crucial practice for you really spend time with an object in a three dimensional space. It is an experience that not only develops keen observation, but awareness that can transcend drawing itself. When I talk to anyone, it is become habit for me to really be present with them an look deep into their eyes, their being. I attribute this largely, from the discipline of years of life drawing. This is an example of how it has become a spiritual practice for myself. (2) In developing the technical foundation for drawing/painting, one sees that it can be broken down into few, and various concepts. Line, shape, color, etc. And from here, one can choose more and more not only what one wants to paint, but how to paint it. This is an orchid, painted from a photo in my art with elders class at some past time. (3) This was painted for my first show after school, where I began to explore the cultural expression of my 'self, culture, nature' project. This is one of the earlier examples where I was making the effort to bring my development of technical skill, with an execution of an idea together. I borrowed a 38 pistol from my friend Derek, and mounted it to the wall. I spent alot of time with it, appreciating its beauty and reflecting on aggression/violence in the process. The benefit that I found in doing more labor intensive work that demands time, was reflection in the process for the concept at hand. For this I was painting objects as symbols of contemporary Americana. This is also the beginning of my dollar bill series where I continued this same process, idea which I will discuss in another posting. 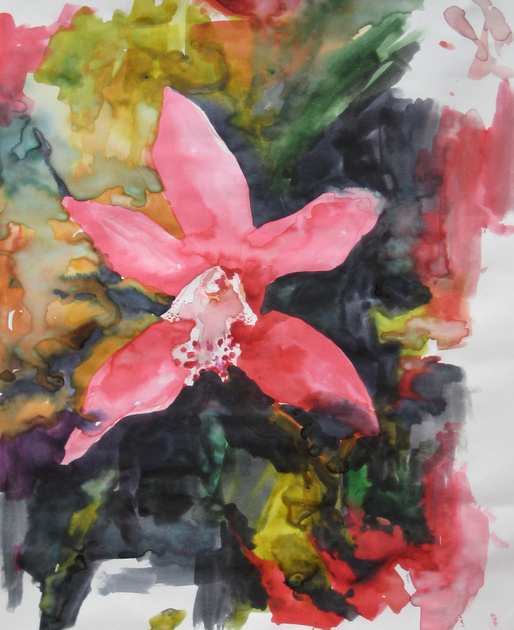 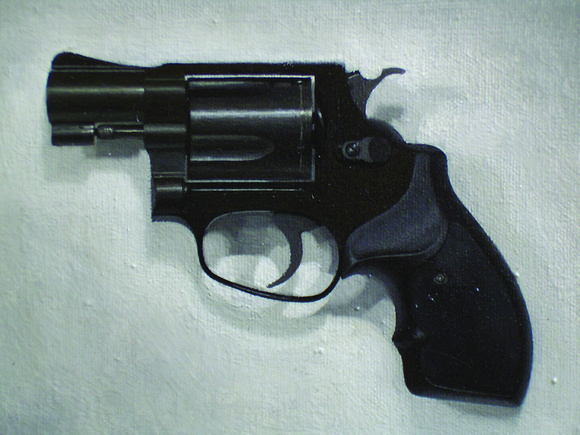